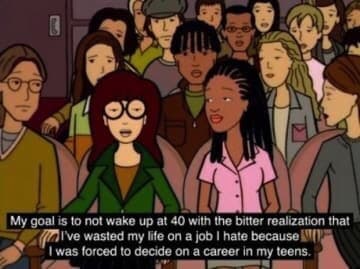 I’m lying inside a giant box.

No, that’s not some weird metaphor. I am literally lying inside a giant box.

Because when our new fridge arrived the other day, my first thought was, Charlie’s going to love this box.

And, I was right.

Now, I’m lying inside this giant box as she sleeps sweetly, cuddled into me because, “Mama sleep in box, please,” completely melted my heart. And when your daughter melts your heart. You just can’t say no.

So, as I lie here (at 03:35 am because, apparently, my body doesn’t like sleep) I am thinking about the box ,and why I thought of Charlie when most adults would be excited about the new fridge.

(Is it that my brain is now incapable of thinking about anything beyond her? Very, very possible).

But then I remembered…Boxing Daria.

For those unfamiliar, Daria was an animated MTV show in the 90s. Undeniably the best show ever created, in my opinion. Now don’t get confused, animated, yes-—but certainly not your typical cutesy, Disney variety—(I LOVE those too!). Daria was produced by MTV for a teen audience, which had all your typical teen angsty goodness with a touch of humor. It also spawned my love of satire, and possibly the reason I use sarcasm on a daily basis.

In the “Boxing Daria” episode, she finds comfort in a refrigerator box during a difficult time in her early years (thus, me lying in a giant box with my kid). While not hugely positive, Daria’s perspectives of the world around her provided opportunities for me to explore ideas that challenged social norms and pop culture. My individualist values are definitely due to her refusal to conform to societal norms. (I’m really putting a lot of stock in a fictional character. Noooot entirely sure what to make of that.)

I’m not saying, this is only in China.

I know this happens everywhere. But because of China’s collectivist culture, individualism is not highly valued. There are so many societal pressures and to step away from the norm is highly frowned upon here. For some people, at least. Despite this, it is also getting a bit better. I still wouldn’t call it progressive, but there are sparks of hope every now and then (Yay, China!).

It’s 06:00 am now and I’m reminiscing about a cartoon (I can almost feel your eye roll…get to the point already). Anyway, so it got me thinking…Daria was socially awkward, completely pessimistic, and wasn’t always pleasant to her peers. She was an outlier, yet despite all that, she remained true to herself, and it made her resilient.

At the end of the day, this is really all I want for Charlie.

I’m excited to watch Daria with Charlie (I mean when she’s 12, but let’s be honest. I’ll introduce this A+ cartoon much sooner!). It will probably seem so ancient to her by that time, but considering my values are still the same…perhaps, Daria was onto something way back in the 90s.

Case in point, there is so much truth to this response to a question about her goals in life.

*As an Amazon Associate I earn from qualifying purchases